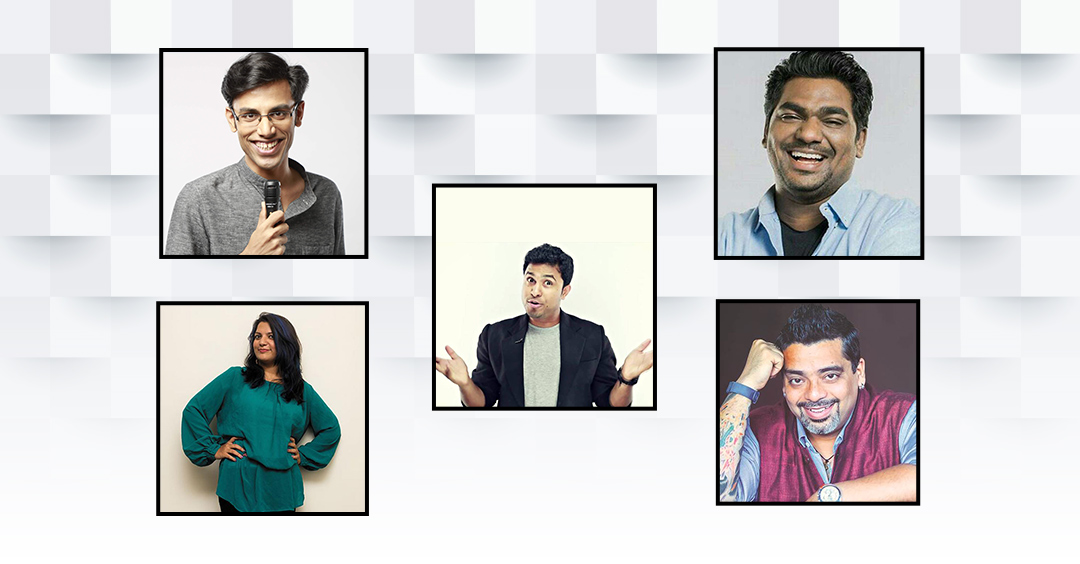 It was his “AIB Diwas” performance that went viral on social media. Ever since then, Zakir Khan has never looked back. He has given some numerous stellar performances and has made some special place in the heart of a youth. He is one of the best stand-up comedians whom you can love watching again and again.

Biswa Kalyan Rath might look weak in appearance but his punches are strong when on stage. He adds a bit extra humor when speaks in changed dominating voice. He has recently given a giggling performance ‘Biswa Mast Admi” for Amazon Prime.

Abish Mathew is an actor and comedian who has sort of changed the whole scenario for stand-up comedians. His stand-up video describing plane Vs train is hilarious. He has one of the best sense of humor and never disappoints with his comic time. He also hosts a chat show called “Son of Abish”  where actors and comedian turn up for some candid discussion with him.

Aditi has been the guiding light for many women comedians in India as she has been the very first woman comedian in our country. Her video about breast and bra shopping has been viral on social media as well. She is definitely one of the best women stand-up comedian in India right now.

Jeeveshu’s has some comic time to applause. His stand-ups are so popular among youth and teenagers that you can imagine how relatable punches he has under his belt. His hilarious atrocities of a Punjabi mother or self-deprecating fat jokes is one of the best to watch if you haven’t.

With his recent success over his stand-up video called ‘Cheating’, he is definitely worth to watch. Anubhav cracks real-life jokes and certainly, he observes things brilliantly as most of his jokes are from his real-life experiences which make it relatable.

One of the emerging stand-up comedians who is getting some great response from the audience for his comic delivery and interpretation. Gaurav Kapoor has significantly made his mark in this sort span of time. His video ‘Missing Testicle’ went viral but later he deleted that video from his Youtube channel and uploaded it again after a short while.

One of the wittiest comedian you would come across. Jaspreet singh has won hearts with his relatable punch lines and story telling. often heard telling people about the stereotype individuals have for Punjabis. Hitting millions of views on his videos, gradually making his mark through his spontaneous and unpredictable jokes.

Another comedian who has stood firm in this industry and came on top floating. His ‘The Big Bhaang Story’ was loved by millions of people on YouTube. Devesh Dixit has the knack to make people laugh through his wicked sense of humour.

Another great comedian who has established himself firm in past couple of years. Abhishek Upmanyu has grabbed all the lime-light with his real life observation combined with his fiction writing. He is surely one of those comedian you can pay to watch him live.