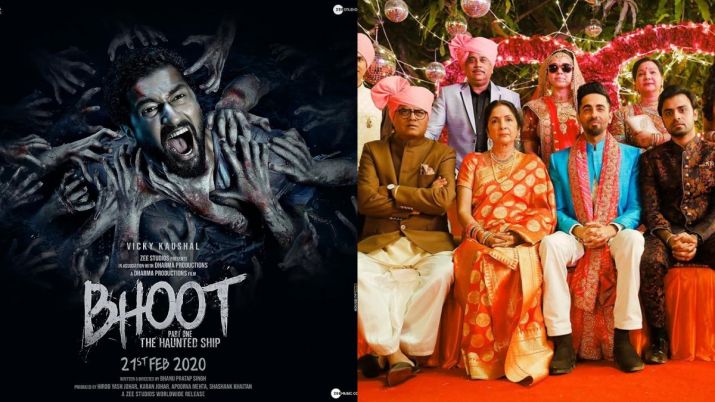 ‘Shubh Mangal Zyada Saavdhan’ Vs ‘Bhoot Part One: box office clash; Which film should you watch this weekend?

After Ajay Devgn’s ‘Tanhaji: The Unsung Warrior’-Deepika Padukone’s ‘Chhapaak’ and Varun Dhawan’s ‘Street Dancer 3D’-Kangana Ranaut’s ‘Panga’, today was the third biggest box office clash of this year. The National Award-winning actors Vicky Kaushal and Ayushmann Khurrana’s movies clash the box office for the first time with their respective films ‘Bhoot Part One: The Haunted Ship’ and ”Shubh Mangal Zyada Saavdhan’. We all know both the actors Ayushmann and Vicky have amused us with some remarkable movies like Andhadhun, Uri: The Surgical Strike, Bala, Sanju and much more.

Starring Ayushmann Khurrana, Jitendra Kumar, Neena Gupta and Gajraj Rao Shubh Mangal Zyada Saavdhan is a comedy-drama film following the romance between two men. With a healthy dose of laughter, the movie delivers a crucial message on homosexuality. While Vicky Kaushal’s ‘Bhoot’ is a horror-thriller that is based on a true incident that took place in Mumbai. It is a story of a couple on an abandoned ship lying static on a beach.

Although the film Shubh Mangal Zyada Saavdhan has a well-built concept, the story and its treatment could have been better. The first half moves at a fair pace while the second half appears to be a bit dragged and lengthy. The film will definitely make you laugh while highlighting such a sensitive issue; the dialogues in the movie are comical and smartly written.

As on 21 Feb at 6:00 PM, the rating of the movie ‘Shubh Mangal Zyada Saavdhan’ are as follows:

On the other hand, Vicky’s ‘Bhoot Part One: The Haunted Ship’ will keep you on the edge of your seat during the first half. Sadly, the second half comes crashing down and made the movie a not so blockbuster movie. Though the twist of the film will definitely get your attention, the film as a whole was not a full pack as expected. Also, the way Ashutosh Rana’s character has been handled towards the end is pitiful.