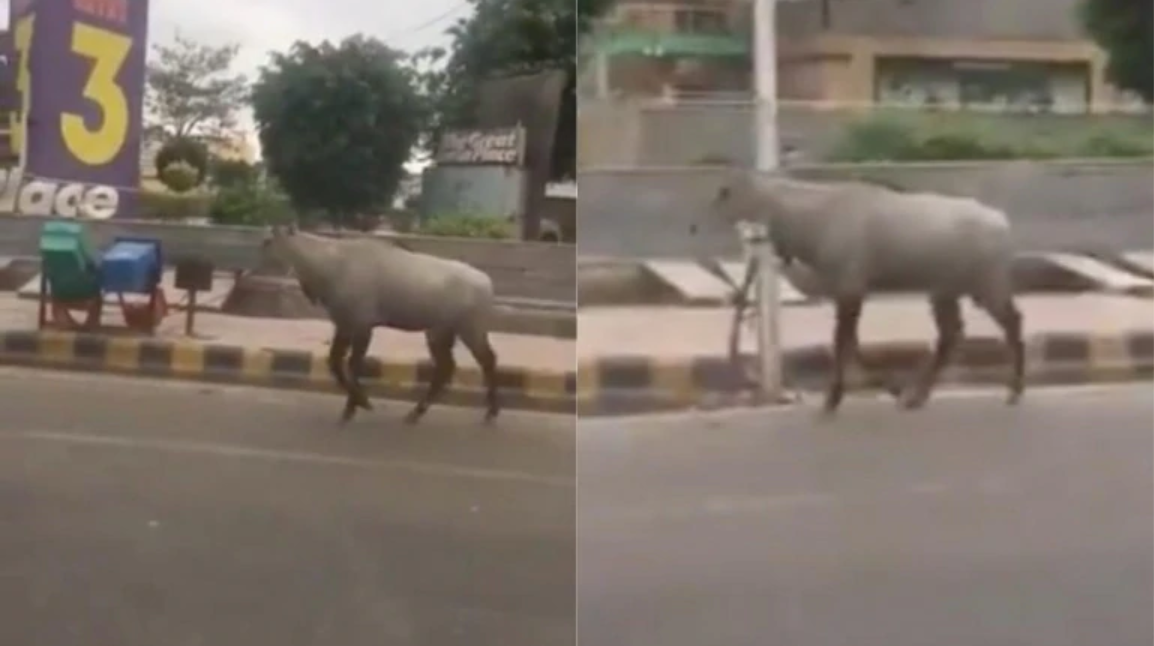 Humans Locked Inside, Animals roaming out on Road

Humans have been expanding their feet for long time now. The growing human population has pierced into wildlife’s space, forced several animals to either distinct or disappear. Animals have suffered a lot due to the urbanization of cities. But due to corona virus outbreak, countries have locked themselves up to prevent further spread of the deadly COVID-19. The unexpected lockdown has brought human activities to a standstill. Indian government declared 21-day lockdown for entire country till 14th April 2020. Now the animals are showing up on roads in few parts of the country. People spotted many wildlife animals from their balconies and video went viral on social media soon after. People are believing, nature is claiming what once belonged to them. It was once their habitat and humans have messed their privacy by taking over their space.

In India, due to three weeks lockdown, human activities have been brought to a halt and animals are roaming freely on the road which once, belonged to them. The animals are now casually inspecting what humans have made. Since people are confined to their home, wildlife finds the roads easily accessible. Video went viral on twitter showing different animals in different parts of India. Many users said, Mother earth is rebooting itself. All thanks to non-human activities and absence of tourists, the wildlife is up and running to wherever they want.

Animals are really taking full advantage of unavailability of humans. Nilgai (Blue Bull) was seen hanging around near GIP Mall, Noida. Look at those horns, not many would have seen Nilgai in real.

This is unbelievable. Nilgai takes over #Noida streets. Not bad a video to watch during #Lockdown21. ❤️
(Video via #WhatsApp) pic.twitter.com/IfHJIQfPgS

Another endangered mammal Malabar civet, was not seen in long time, resurfaces in Calicut town.

Now it’s turn of the Malabar large spotted civet on the road👍🏻Critically endangered with fewer than 250 matured individuals. Endemic to western ghats, not seen since 1990 surfaced at Kozhikode( sometimes known by its anglicised version, Calicut) during present lockdown. pic.twitter.com/aDvsx9QEGC

Dolphins at Marine Drive. Yes, we are not Kidding, people spotted dolphins near the coast taking fresh air quite often.

The air in Mumbai is so nice, light and fresh ..!!! I can’t believe it 😃… and it seems dolphins were sighted just off the shore near Breach Candy club ..!!! This shutdown of cities is not so bad after all #CoronavirusPandemic pic.twitter.com/t94vhFyPRy

People used to feed Deers in Japan, due to lockedown, they showed up on roads in search of food.

Apart from animals reclaiming their territory, a lot of positive things also came with the result of lockdown. Pollution level has come down, lakhs of litres of fuel have been saved, Sky is clear than before, people are spending time with their families, bird are flying without any fear etc. Every action has both negative and positive aspects and when you think about the positives of lockdown, you would think, this should be done on regular basis now. Do you think the same?

Image Source: www.indiatoday.in
TAGS: Animals on road, humans in, Humans in animals out on road, Wildlife on road