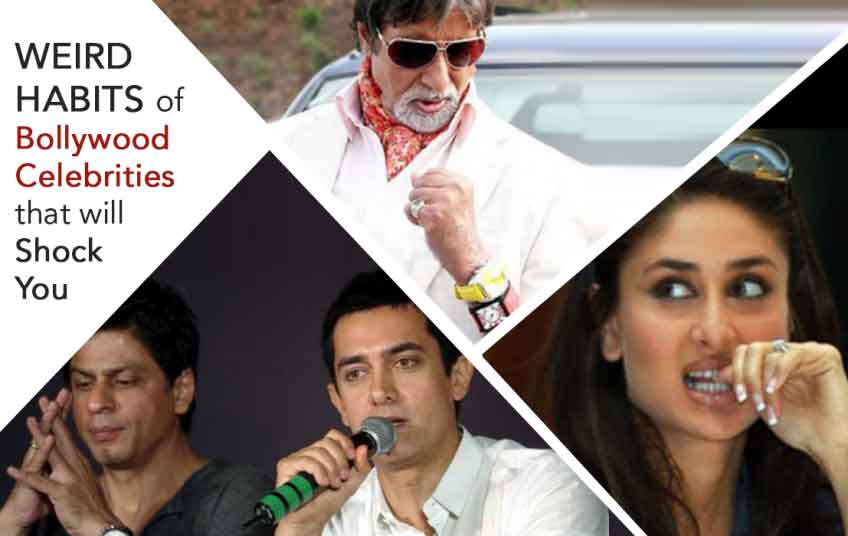 Weird Habits of Bollywood Celebrities that will Shock you

Just like normal people, celebrities also have some habits that can be shocking to us. It’s interesting to know about the deep details about your favorite celebrity. Some of their habits are good, bad, weird. Let’s read out those habits that will amaze you.

Did you know? The Badshah of Bollywood is obsessed with footwear. He loves his footwear like anything and doesn’t like to remove them. Even he has accepted it in an interview that he likes to take off his shoes only once a day. Not only this he even falls asleep with shoes on.

Bebo has childhood habit that she has failed to let go; supposedly she can’t control herself from biting her nails. Though she needs a lot of efforts to maintain her nails but all that effort goes in vain. Hence, now she needs to wear acrylic nails.

This one is really kind of a weird habit! We all like clean teeth but Ayushmann Khurrana loves them, so he brushes his teeth as often as he can. Is it like ever ready for romance? Fresh breath and all done!

The handsome hunk of the Bollywood has a common habit. John constantly shakes his leg, not caring where he is. It may bother other people around him but he cannot do anything, he just can’t stop it!

Totally out of the box habit but at the same time it is pretty sweet. Big B wears two wrist watches at the same time. But there is an adorable reason behind this habit. It is for his children, when Abhishek or Aishwarya travels one watch is set to the Indian Standard time and second one is set according to their time zone.

Trust me this one is weird and a confusing habit. The most versatile actress has a habit to keep her mobile away from her. She is so much disinterested in her cell phone in the time of social media trend that she fails to check her phone for many days and due to this she has missed few of her events.

Well not so good habit. She is a chain smoker and when she wakes up she needs a smoke. Hope she has controlled her habit now after the marriage.

This pretty lady of Bollywood has good habit. She is a cleanliness freak especially when it comes to bathroom. She double checks the bathroom’s cleanliness every time she books a hotel.

Ok! Now I am confused is it a good habit or a bad one, I will add this into the weird category. He likes to be comfortable in his bathroom just like the bedroom. He has library and telephone extension there. No wonder he prefers spending hours in his bathroom.