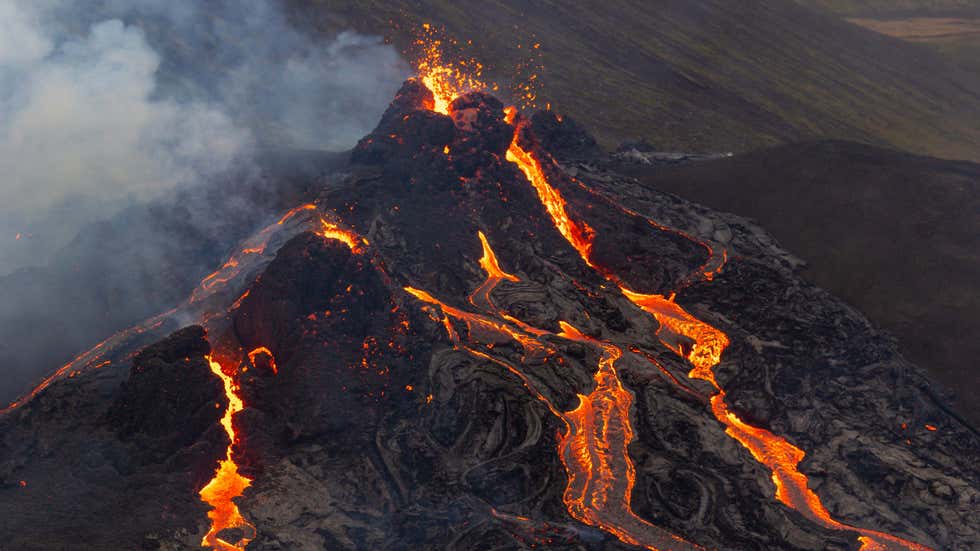 “The eruption is considered to be small and due to its location, there is no threat to any populated areas or critical infrastructure,” a government press release said. “A few roads in the vicinity of the eruption have been closed and people are advised to stay away from valleys and other places near the fissure where toxic gases can accumulate.”

The Icelandic Meteorological Office, which is monitoring the eruption, said on Saturday that the activity had decreased since the eruption began at about 8:45 p.m. local time Friday. The flow was bout 550 yards at its widest point.

The lava flow is what’s known as a fissure eruption, also called an “Icelandic-type,” according to the news release. Such eruptions usually don’t result in large explosions or significant ash production. It’s expected to last anywhere from a few days to a few weeks.

Night-time aerial video taken from a coast guard helicopter and posted to Twitter by the meteorological office showed the bright red-orange fingers of lava flowing and pooling down the sides of the volcano Friday night.

The volcano is about 20 miles outside the capital of Reykjavík. The Keflavik/Reykjavík International Airport was briefly closed Friday night while scientists assessed the situation and confirmed that the eruption wouldn’t interfere with air travel, according to the news release.

A larger eruption in a different part of Iceland in 2010 shut down much of Europe’s airspace for days.

The eruption wasn’t unexpected. It’s part of an ongoing geological event that was first noted in January 2020 and follows more than two weeks of increased seismic activity that started with a 5.7 magnitude earthquake on February 24, the government said.

More than three dozen earthquakes measuring 3.9 magnitudes have been recorded in the general area of the volcano in the past month, according to the U.S. Geological Survey.

Iceland sits directly atop the Mid-Atlantic Ridge, a submerged mountain range that runs from the Arctic Ocean past the southern tip of Africa. The ridge is the boundary between the North American and Eurasian tectonic plates.

The plates are moving apart at a rate of nearly an inch per year, according to the USGS. Over millions of years, the spreading created the Atlantic Ocean. The ridge emerges above the ocean surface in Iceland, and is slowly splitting the country into two pieces.

A drone has captured incredible footage of a volcano erupting from a dangerously close distance. The Fagradalsfjall volcano eruption had red lava spewing out of the ground and a crimson glow lighting up the night sky near Iceland’s capital Reykjavik on Friday night.

According to CNET, it was an eruption that Icelanders had been expecting for several weeks. It did not cause any injuries or major disruptions.

Bjorn Steinbekk, who defines himself on his YouTube channel as “a guy with a drone”, managed to  capture stunning footage of the volcano spewing red lava by flying his drone extremely close to Fagradalsfjall.

Volcanic eruptions in the region are known as effusive eruptions, where lava flows steadily out of the ground, as opposed to explosive ones which spew ash clouds high into the sky.

He posted the footage on Facebook, where it has been ‘shared’ nearly 6,000 times and has collected a ton of amazed reactions.

“Amazing. Thank you,” wrote one person in the comments section, while another said, “What a brilliant drone.”

According to news agency AFP, the Krysuvik volcanic system, which does not have a central volcano, is located south of Mount Fagradalsfjall on the Reykjanes peninsula in southwestern Iceland

The Krysuvik volcanic system has been inactive for the past 900 years, according to the IMO, while the last eruption on the Reykjanes peninsula dates back almost 800 years, to 1240.

Iceland has 32 volcanic systems currently considered active, the highest number in Europe. The country has had an eruption every five years on average.