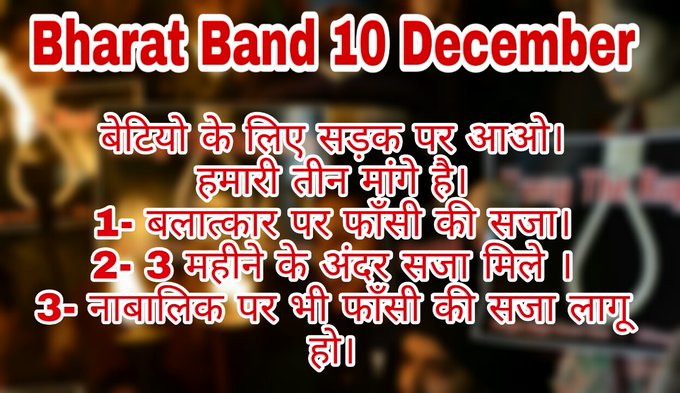 Justice for Priyanka Reddy : #BharatBand10December Trending all over Twitter

Since the December 2012 gang-rape and murder case, rape and sexual violence against women have been in focus in India. Still, there has been no sign that crimes against women are subsiding.
According to the government crime figure data, there are 33,658 police registered cases of rape in India in 2017, that means an average of 92 rapes every day.

After the Dr. Priyanka Reddy rape case, BharatBand10December is trending all over Twitter. What to say after such a brutal rape and murder case, a country where girls are burnt alive a few miles from home. This is really painful and disturbing for the whole country.
In order to stop these rape cases and to create fear in the minds of the culprits, people started this campaign, and say that India should be closed on December 10 and all people should join this mission and come on the streets and ask for the hanging of Priyanka Reddy’s culprits.

Thousands of angry tweets demanding justice for her and people are demanding strict laws from the government for rape cases.

IN SUPPORT OF WOMAN

IN RESPECT OF WOMAN

IN JUSTICE OF WOMAN

#BharatBand10December
I wonder, what are you good at?
Is that corruption, taking bribes at almost every sector, politics, education system, providing government services, stopping crimes like rape, killing, harassing etc?
Yes, India is developing but in a opposite way. No wonder! pic.twitter.com/qdv3i4vng7

I support death penalty for rape
If we create fear in the minds of rapists that was the best result to control this type of cases#BharatBand10December pic.twitter.com/DFILj6aKt1